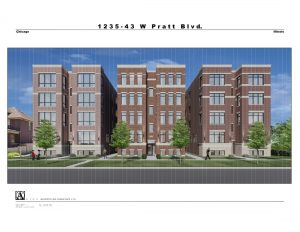 In the RPBG Fall 2020 Newsletter, we reported encouraging progress in the efforts of RPBG Director Ibrahim Shihadeh to build a new, seven-story apartment building with garage parking on the 1200-block of West Pratt Avenue. A lot has happened since then. None of it is good news for housing providers and developers.

Mr. Shihadeh had an initial agreement with the Alderwoman to set aside “10% affordable units plus one.” But, very quickly, this agreement was taken back to be replaced with demands for a larger allocation of affordable units. In recent months, the Alderwoman has insisted she will not approve any development that does not include a 20% set-aside at rents that are affordable to households earning as little as 30% of area median income (AMI).

During this frustrating and protracted “negotiation,” construction costs soared upward and the Chicago City Council passed a new version of the ARO (see the related article in the Spring Newsletter). The 2021 ARO now sets the bar for affordable housing even higher than the previous (2015) version. For Rogers Park, the new ARO upped the minimum percentage of affordable units from 10% to 20%. Although the new ordinance does not go into effect until October, Alderwoman Hadden has used this new threshold as justification for her 20% demand.

In response to these events, Mr. Shihadeh went back to the drawing board and came up with a new design that he believed would address some of the concerns of both the Alderwoman and the larger Rogers Park community.

Instead of building a 78-unit building with a 40-stall parking garage, Mr. Shihadeh dramatically downscaled to just 24 units in three, 3-story, eight-unit, walk-up buildings with surface parking at the rear of each lot. This lowers his cost of construction, but also gives the Alderwoman and the community two things they previously said they wanted: larger “family-sized” units and lower density.

Technically, the new design should be completely exempt from the requirements of the ARO since developments have to be at least ten units before the ARO applies. Mr. Shihadeh could build each eight-unit building individually, completely avoiding the ARO requirements.

But the Alderwoman does not appear to care about what the ARO actually requires or when it actually goes into effect. She wants her 20% affordable units and has made it clear to Mr. Shihadeh that there will be no zoning change approval unless she gets it.

So it is even more ironic that Mr. Shihadeh has never taken the position that no affordable units should be built. To the contrary, Mr. Shihadeh has offered to designate one unit in each building – 12.5% of the total – at affordable rents at the 60% of AMI threshold.

Mr. Shihadeh strongly believes his proposal goes much more than half way to meet the Alderwoman’s requests and should be more than sufficient to gain her support for the necessary zoning change. In fact, Mr. Shihadeh even offered to sweeten the pot. In addition to the three affordable 2BR plus units, he offered to place two affordable units in a neighboring existing apartment building that he owns. The Alderwoman rejected that offer, insisting that all five consist of the larger 2BR plus located in the new construction.

From Mr. Shihadeh’s perspective, the new development will do all of the following:

Mr. Shihadeh has built his career on consensus, always working cooperatively with community partners, including politicians, community activists and other stakeholders. He does not like conflict and believes in the art of compromise. He has invested in the Rogers Park community for decades, often at great personal risk. As a result, he can legitimately claim to have played an important role in bringing the neighborhood back from the brink of collapse after decades of disinvestment and neglect. His commitment to the neighborhood is beyond reproach.

Alderwoman Hadden has publicly stated that she in not anti-development and wants to work with developers to create new housing opportunities in Rogers Park. Here is her golden opportunity to do just that – and family-sized, two and three-bedroom units as an extra added bonus of which more than 10% would be reserved for low and moderate-income families. Yet she insists on 20% at deep subsidies – or nothing at all.

Faced with this stark choice between financial infeasibility and the status quo, Mr. Shihadeh regretfully must choose the status quo.

Alderwoman Hadden, this is your moment to choose:

Mr. Shihadeh knows something about what it takes to be successful and build a business. He arrived in the United States with nothing, and through hard work and perseverance, has created a company that has benefitted the entire city and countless thousands of residents who reside in his buildings.

We are truly at a crossroads. Rogers Park could get desperately needed new housing – or it could get 20 more years of unpaved gravel parking. The choice is yours. Please show us you mean what you say when you purport to represent all of the Rogers Park community. On behalf of Mr. Shihadeh and the entire membership of Rogers Park Builders Group, show us that you can be a consensus builder and a leader. In just a few words – please, be reasonable. It’s really all we ask.