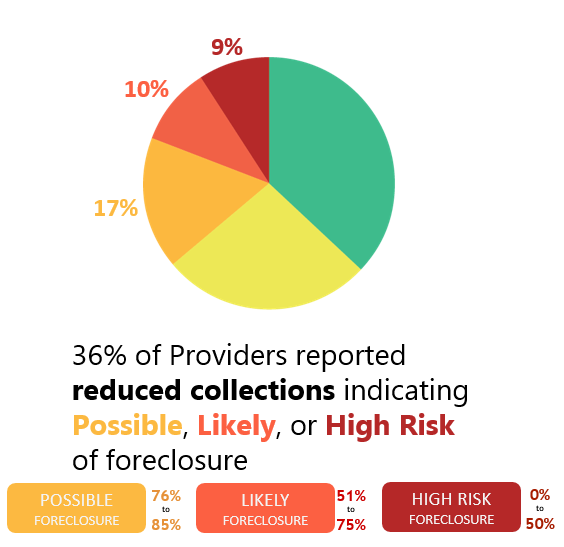 The Neighborhood Building Owners Alliance (NBOA), in cooperation with its affiliate members, conducted a second quarterly online survey of nearly 400 Chicago housing providers to determine the effect of COVID-19 on the stability of the City’s (and surrounding MSA) rental housing market. The survey of December, 2020, rental market conditions was conducted January 15 through January 24th, 2021. Click HERE for the complete survey results (PDF)

A follow up to last fall’s NBOA survey of September rent collections, this survey focused on December rent collections and explored whether the collection and performance landscape has changed in the three months following the initial survey. By surveying the same audience and repeating key questions, the survey provides an excellent indication of how housing providers have fared in the last quarter compared to the third quarter of 2020.

As the economic fallout from the COVID-19 pandemic continues, Chicago’s neighborhood housing industry is at risk due to growing shortfalls in rent. Absent effective and prompt federal rental assistance, the percentage of tenants who are more than six months behind in their rent is likely to increase exponentially in the coming months. We have seen this play out in the last three months as the percentage of housing providers who having tenants behind in their rent increased from 71% in September to 79% in December. This growing rental arrearage is making it increasingly difficult for housing providers to meet their financial obligations and maintain the same level of services for their tenants.

If this trend continues unabated, many Chicago-area rental buildings will face foreclosure, resulting in instability for the buildings and housing insecurity for the tenants. This trend also portends dire consequences for the stability and economic vitality of our neighborhoods as rental apartment buildings fall into disrepair and property values decline. The problem of serious rent arrearage is most pronounced in Chicago’s south side and south suburbs, as half of the respondents from those areas report having tenants who are more than six months behind in rent.

The problem is exacerbated by overly broad government-imposed eviction moratoriums that fail to differentiate between tenants who are truly suffering financially because of the pandemic and those who can pay their rent, but are simply taking advantage of the moratoriums to live rent-free. Apartment vacancy rates and falling rents further exacerbate the fragility of the housing market, making it more difficult for housing providers to generate revenue to pay for their buildings’ expenses, such as mortgage payments, property taxes, payroll, building maintenance, utilities and capital improvements.

Rent collections have dropped significantly in the last three months.

Rent collections in the month of December 2020 saw a harrowing drop of nearly 20% compared to September 2020. The industry standard for a safe level of rental collection is 95% payment of full rent, otherwise known as a “stabilized” value. The September NBOA survey revealed that only 46% of housing providers reported a rent collection level at the stabilized value. This fell to an alarming 37% in December – a nearly 20% drop in just three months. Equally alarming, the percentage of housing providers who indicated their rent collections were below 85% – a level seen as indicative of risk of foreclosure – increased from 29% of housing providers in September to 36% in December, meaning that well over one-third of respondents likely are losing money on their buildings.

Housing providers are facing rent arrearages of more than 180 days.

Tenants are not always communicating their needs to housing providers.

Half the housing providers responding to the survey said they had tenants who refuse to communicate with them. This finding is consistent with the September survey findings. The lack of communication from tenants is a serious problem and hampers housing providers’ ability to manage their buildings effectively. When tenants fail to inform their housing providers of their inability to pay their rent, housing providers are unable to budget for expenses or negotiate accommodations or payment plans with their tenants.

Housing Providers are pessimistic about having enough cash on hand to meet 2021 obligations.

When asked how their anticipated rent collection for 2021, will affect their ability to manage their buildings, housing providers indicated as follows:

The survey asked housing providers to indicate the type of buildings they owned, the size of their portfolio (by number of housing units) and the location of their buildings.  Those responding to the survey own a combined total of approximately 68,000 rental units throughout Chicagoland. Over two-thirds (approximately 70%) of the respondents consist of small and mid-sized housing providers who own fewer than 100 rental units and/or own ten or fewer buildings. Further, half the respondents (50%) reported owning five or fewer properties. As such, this survey is representative of Chicago’s smaller to medium-sized housing providers who make up the bulk of the area’s rental housing stock.

Their combined membership of over 600 housing providers own more than 3,500 buildings and more than 78,000 rental units.