We are staring down the end of one year and the beginning of another – and not just any year. Twenty-twenty promises to be like no other, with an election looming that will be as momentous as any in recent memory. 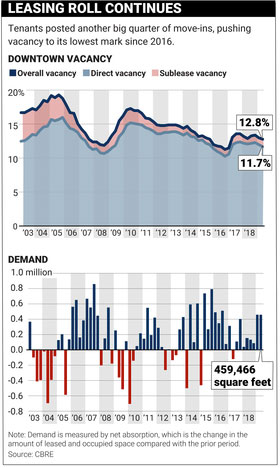 A year out from election night, it’s hard to say who the candidates will even be. It seems highly likely that the Republican candidate will be incumbent Donald Trump. But his erratic behavior and current Whistleblower troubles hold the remote, but not inconceivable, possibility that the Trump presidency will come crashing down before the election even happens.

As for the Democrats, it is much harder to predict who the candidate will be. Biden remains the front-runner, but seems wounded by the Whistleblower controversy due to the unseemly appointment of his son, Hunter, to lucrative Board positions in China and the Ukraine. Bernie Sanders still has lots of popular support, but recently suffered a heart attack. Elizabeth Warren is surging, but is she too liberal for the Independent voters who will likely determine the election?

At the local level, my crystal ball is as cloudy as ever. The downtown party train just keeps on rolling. Crain’s recently reported that office vacancies are once again near historic lows, despite the addition of millions of square feet of new office space in recent years. Just look at Fulton Market or the Old Post Office, both deserts of inactivity just a few years ago, and both thriving today as tenants line up to secure space at a frenzied pace. The Loop is booming as never before and is transforming the city in ways that we never thought possible even ten years ago.

But the downtown employment and development boom is not the whole story. The city’s (and the state’s) fiscal problems remain, and are getting worse. The Chicago Teachers Union strike, which lasted 11 days, is a good example of what ails Chicago. Apparently, a 16% pay increase over five years, pushing average salaries to nearly $100,000, was not enough. CTU’s demands for smaller class sizes and increased support staff may not appear unreasonable, but their total lack of a reasonable plan for how to pay for it most certainly is. The inconvenient reality is that the city is broke. The only people who don’t seem to be aware of this are the public unions who never seem satisfied, and who always expect someone else to pick up the tab for their demands.

Who, exactly, is that someone else supposed to be? The CTU’s answer, and the answer of the public unions generally, is to increase taxes, particularly on the rich. The problem is, the rich are mobile and don’t have to live in Illinois if costs here get out of line with other, warmer, more business-friendly states like Florida and Texas. The steady outward flow of people from both the city and the state, and our all-but-dead residential real estate market, are two clear indications that taxes have reached a point where people who can afford to live somewhere else are choosing to do so. Witness the North Shore where many homes are selling for less than they commanded 20 years ago – if they are selling at all.

I worry about a lot of things as we enter the 12-month period before the next Presidential election. But mostly, I worry that our polarized society is reaching a breaking point where our democratic system simply shuts down. Like a slow-motion train wreck, it’s almost as if we are watching it happen now.

So, yes, there is reason to be optimistic as we enter the New Year. But there is much risk as well. On the one hand, Chicago could be on the verge of a renaissance of economic growth and prosperity as the seemingly unstoppable Central Area continues to perform like the Energizer Bunny. On the other hand, the anti-urban Republicans in Washington seem hell-bent on punishing Chicago and other blue cities while local Democrats with too much faith in Socialist ideology seem blithely unaware of the damage they are doing to the city from within.

I have real concern that Chicago may not be able to withstand these dual attacks from both inside and outside its borders. I fear that our future prosperity may hang in the balance. Perhaps this will all become clearer a year from now. Then again, we may not get any real answers to these questions for a long time to come.